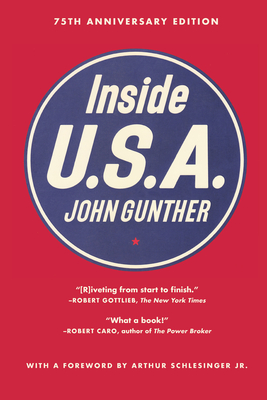 The seventy-fifth anniversary edition of Gunther's classic portrait of America

John Gunther's Inside series were among the most popular books of reportage of the 1930s and 1940s. For Inside U.S.A., his magnum opus, Gunther set out from California and visited every state in the country, offering frank, lucid, and humorous observations along the way in what legendary publisher Robert Gottlieb, writing in the New York Times, calls Gunther's "fluent, personal, casual, snappy" voice. Gunther's insights on race, labor, the impact of massive New Deal public works projects, rural life, urbanization, and much more yield fascinating insight into life in a postwar America that had vaulted into the status of the world's preeminent superpower.

This seventy-fifth-anniversary edition of Inside U.S.A. provides an invaluable picture of America as it was and is both a delight to read and filled with insights that remain deeply relevant today.

John Gunther (1901-1970) was an American journalist and the author of many books, including the acclaimed Inside Asia, Inside Latin America, Inside Europe, Inside U.S.A., and Death Be Not Proud.