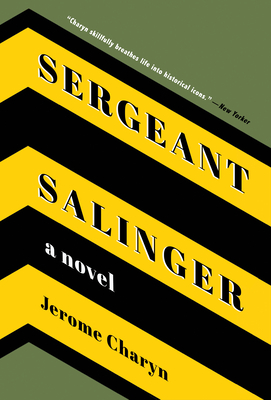 A shattering biographical novel of J.D. Salinger in combat

J.D. Salinger, mysterious author of The Catcher in the Rye, is remembered today as a reclusive misanthrope. Jerome Charyn's Salinger is a young American WWII draftee assigned to the Counter Intelligence Corps, a band of secret soldiers who trained with the British. A rifleman and an interrogator, he witnessed all the horrors of the war--from the landing on D-Day to the relentless hand-to-hand combat in the hedgerows of Normandy, to the Battle of the Bulge, and finally to the first Allied entry into a Bavarian death camp, where corpses were piled like cordwood.

After the war, interned in a Nuremberg psychiatric clinic, Salinger became enchanted with a suspected Nazi informant. They married, but not long after he brought her home to New York, the marriage collapsed. Maladjusted to civilian life, he lived like a "spook," with invisible stripes on his shoulder, the ghosts of the murdered inside his head, and stories to tell.

Grounded in biographical fact and reimagined as only Charyn could, Sergeant Salinger is an astonishing portrait of a devastated young man on his way to becoming the mythical figure behind a novel that has marked generations.

Jerome Charyn is the author of more than fifty works of fiction and nonfiction, including Cesare: A Novel of War-Torn Berlin. He lives in New York.

Jerome Charyn is the author of more than fifty works of fiction and nonfiction, including Sergeant Salinger; Cesare: A Novel of War-Torn Berlin; In the Shadow of King Saul: Essays on Silence and Song; Jerzy: A Novel; and A Loaded Gun: Emily Dickinson for the 21st Century. Among other honors, his work has been longlisted for the PEN Award for Biography, shortlisted for the Phi Beta Kappa Christian Gauss Award, and selected as a finalist for the Firecracker Award and PEN/Faulkner Award for Fiction. Charyn has also been named a Commander of Arts and Letters by the French Minister of Culture and received a Guggenheim Fellowship and the Rosenthal Family Foundation Award for Fiction from the American Academy of Arts and Letters. He lives in New York.

“Jerome Charyn, like Nabokov, is that most fiendish sort of writer—so seductive as to beg imitation, so singular as to make imitation impossible.” —Tom Bissell

“Charyn is one of the most important writers in American literature.” —Michael Chabon

“Charyn is a one off: no other living American writer crafts novels with his vibrancy of historical imagination.” —William Giraldi

“One of our most rewarding novelists.” —Larry McMurtry

“Among Charyn’s writerly gifts is a dazzling energy―a highly inflected rapid-fire prose that pulls us along like a pony cart over rough terrain.” —Joyce Carol Oates, New York Review of Books

“One of our most intriguing fiction writers.” —O, The Oprah Magazine

“Charyn’s blunt, brilliantly crafted prose bubbles with the pleasure of nailing life to the page in just the right words.” —Washington Post

“[Charyn] writes with the sort of whirlwind energy that turns the seediest story into a breakneck adventure.” —Wall Street Journal

“Charyn has a gift for the unexpected, both linguistically and narratively. . . . The result is at once surprising and very entertaining.” —BookPage

“For half a century, [Charyn] has been an unpredictable, unclassifiable, and above all exactingly smart author.” —Open Letters Review

“Wherever he takes us, Charyn’s mind is always agile, and his prose is stunningly electric.” —Jewish Book Council