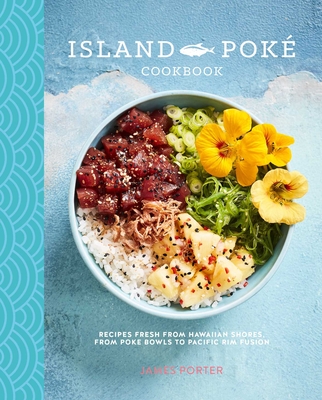 The Hawaiian people have a laid-back love of life, and Island Poké is a London restaurant committed to sharing this ethos and the authentic flavours from these shores in over 65 recipes.

Poké (pronounced Po-Keh) means to ‘slice’ or ‘dice’ in Hawaiian but it has evolved to become the Hawaiian staple of sliced raw fish served on rice with many condiments and toppings. James, the author and founder of Island Poké, became hooked on this delicacy as a child on the beach in Maui. Fast-forward a couple of decades, James sensed a gap in the market for an authentic and sustainable approach to Hawaiian cuisine. Thus, Island Poké was born − fusing the joy of real Hawaiian food, which is a delicious fusion of many cuisines including Polynesian, Japanese, Chinese, South American, Pacific Rim and even Portuguese influences. The book includes recipes for popular poké dishes sold in the restaurant such as classic Spicy Ahi and Golden Beet with Chile Lime Shoyu. There are multicultural Pacific Rim inspired dishes such as Sea Bass Crudo, Teriyaki Salmon Chirashi and Baja Poke Tostadas. Famous Luau feasting recipes include Kalua Pork, Pacific Chowder and Huli Huli Chicken. Finally, a chapter showcasing tropical brunches and bakes includes Acai Bowls and zucchini and Pecan Loaf.

James Gould-Porter is a British-born restaurateur who was raised between Hawaii and California. After studying History of Art in Florence he went on to work at renowned auction house Bonhams. In 2012 James made his first foray into the street-food industry selling Tuscan delicacy bolito on London’s Brick Lane. Hooked on the buzz of street-food, he left the art world and bolito behind to focus on his true passion, poké. James trained under an ex-Nobu sushi chef before starting to sell poké in street-food residency Little Feast. With investment from ex-Soho House commercial director Chris Miller, the first Island Poké restaurant opened in Soho in November of 2016 and a second Island Poke restaurant opened in Liverpool Street in July 2017.