Half Lives: The Unlikely History of Radium (Hardcover) 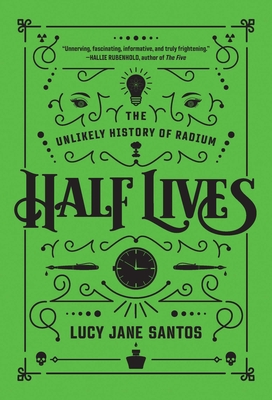 The fascinating, curious, and sometimes macabre history of radium as seen in its uses in everyday life.

Of all the radioactive elements discovered at the end of the nineteenth century, it was radium that became the focus of both public fascination and entrepreneurial zeal.

Half Lives tells the fascinating, curious, sometimes macabre story of the element through its ascendance as a desirable item – a present for a queen, a prize in a treasure hunt, a glow-in- the-dark dance costume – to its role as a supposed cure-all in everyday twentieth-century life, when medical practitioners and business people (reputable and otherwise) devised ingenious ways of commodifying the new wonder element, and enthusiastic customers welcomed their radioactive wares into their homes.

Lucy Jane Santos—herself the proud owner of a formidable collection of radium beauty treatments—delves into the stories of these products and details the gradual downfall and discredit of the radium industry through the eyes of the people who bought, sold and eventually came to fear the once-fetishized substance.

Half Lives is a new history of radium as part of a unique examination of the interplay between science and popular culture.

Lucy Jane Santos is an expert in the history of twentieth-century health and beauty with a particular interest—some might say obsession—in the cultural history of radioactivity. She is now the Executive Secretary of the British Society for the History of Science. In the past, she has also worked as the Director of the Crime Writers’ Association and for the Gourmet Society, where she was Editor, and at The International Wine and Food Society. This is her first book.

“Historian Santos tracks the history of a mysterious element in her sweeping debut. Radium is not just a scientific marvel, Santos writes, but has also had a profound impact on popular culture. Santos keeps the science accessible, and her survey is full of fun facts; this is sure to please scientific minds and history buffs alike.”
— Publishers Weekly

"In telling this history, Santos is careful not to judge from the perspective of hindsight: the use of radiation in medicine wasn't quackery, it was supported by the best current scientific understanding. It's an entertaining and eye-opening tale of a strange time in the early history of modern science."
— Booklist

“A fascinating work of popular science and history looks back on a time when radium represented everything bright and promising about the future.”
— Shelf Awareness

“Marie Curie holds a special place in Nobel Prize history—not only the first woman to win the prize, but also one of very few people to have been awarded a second. Both were connected with the element radium that she discovered. By 1903, when Becquerel and the Curies were jointly awarded the Nobel Prize for physics, more radioactive elements had been found, but radium caught the greatest attention. As Lucy Jane Santos observes in Half Lives, ‘It is not hard to pinpoint exactly why it was this substance (which Curie referred to as ‘my beautiful radium’) that eventually became the focus of both public fascination and of entrepreneurial zeal.’”
— Wall Street Journal

Advance praise for Half Lives:

“Shines a light on the shocking history of the world's toxic love affair with a deadly substance, radium. Unnerving, fascinating, informative and truly frightening.”
— Hallie Rubenhold, national bestselling author of The Five: The Untold Lives of the Women Killed by Jack the Ripper

"Lucy Santos transports us back to a time when when diners cheerfully drank radioactive cocktails that glowed in the dark. Santos a masterful grasp of a complex area of science history. A delightfully disturbing book that reminds us all of the age-old Latin maxim: caveat emptor.”
— Dr Lindsey Fitzharris, Pen Award winning author of The Butchering Art

"With verve and vivacity, Lucy Jane Santos conducts her readers on a unique tour of the twentieth century's most significant scientific discovery. Before the R-word threatened destruction, it offered hope for the future—teeth would glow white, cocktails would shine in the dark, and cancer would be vanquished. This evocative account puts people and their emotions centre-stage of science's past."
— Dr. Patricia Fara, President of the British Society for the History of Science

"There was a time when radioactivity seemed to promise the future. It was the stuff that twentieth-century dreams were made of—before those dreams turned sour. This marvelous book explores the ways radioactivity stood for a better future. A cautionary tale about the dangers of putting too much faith in simple technological solutions to all our problems.”
— Iwan Rhys Morus, author of The Oxford Illustrated History of Science

“A little gem of a book.”
— The Medical Journalists' Association