Man Seeks God: My Flirtations with the Divine (CD-Audio) 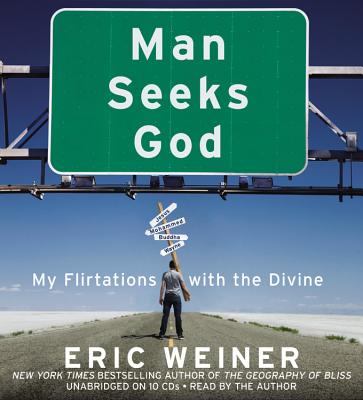 Bestselling author of Geography of Bliss returns with this funny, illuminating chronicle of a globe-spanning spiritual quest to find a faith that fits.

When a health scare puts him in the hospital, Eric Weiner-an agnostic by default-finds himself tangling with an unexpected question, posed to him by a well-meaning nurse. "Have you found your God yet?" The thought of it nags him, and prods him-and ultimately launches him on a far-flung journey to do just that.

Weiner, a longtime "spiritual voyeur" and inveterate traveler, realizes that while he has been privy to a wide range of religious practices, he's never seriously considered these concepts in his own life. Face to face with his own mortality, and spurred on by the question of what spiritual principles to impart to his young daughter, he decides to correct this omission, undertaking a worldwide exploration of religions and hoping to come, if he can, to a personal understanding of the divine.

The journey that results is rich in insight, humor, and heart. Willing to do anything to better understand faith, and to find the god or gods that speak to him, he travels to Nepal, where he meditates with Tibetan lamas and a guy named Wayne. He sojourns to Turkey, where he whirls (not so well, as it turns out) with Sufi dervishes. He heads to China, where he attempts to unblock his chi; to Israel, where he studies Kabbalah, sans Madonna; and to Las Vegas, where he has a close encounter with Raelians (followers of the world's largest UFO-based religion).

At each stop along the way, Weiner tackles our most pressing spiritual questions: Where do we come from? What happens when we die? How should we live our lives? Where do all the missing socks go? With his trademark wit and warmth, he leaves no stone unturned. At a time when more Americans than ever are choosing a new faith, and when spiritual questions loom large in the modern age, Man Seeks God presents a perspective on religion that is sure to delight, inspire, and entertain.

Eric Weiner is author of the New York Times bestseller The Geography of Bliss, which has been translated into eighteen languages. A former correspondent for NPR and the New York Times, Weiner has reported from more than three dozen countries. His work has appeared in the New Republic, Slate, Los Angeles Times, Washington Post, Foreign Policy, the New York Times Magazine, and the anthology, Best American Travel Writing. He divides his time between Starbucks and Caribou.

"Throughout this marvelously entertaining journey, precious and universal truths emerge amid the churning of Weiner's self-conscious intellect and self-deprecating sense of humor. Weiner manages to suspend disbelief long enough to share tales of divine wonders, a possibility in all of us."—Booklist (Starred Review)

"Book of the month... Much of the power of this pilgrimage comes from the characters Weiner encounters-informed, impassioned, and idiosyncratic guides who lead the ever-questioning, ever-doubting author on a magical mystery tour that illuminates our inner and outer paths."—National Geographic Traveler

"I came to Eric Weiner's MAN SEEKS GOD looking for a fight. But in the end, I didn't find the fight I was looking for; instead, I found an affable, candid, deeply thoughtful, sometimes ironic and funny soul, with whom I shared certain similarities.... In the end, despite my proclivity for theological fisticuffs, Mr. Weiner's candor and thoughtfulness were entirely disarming. Whereas some people spend a lifetime searching for their god, Mr. Weiner's whirlwind speed-dating of deities is a thing to behold. I came to admire Mr. Weiner's tenacity and verve, trotting off to places I'll likely never go -- at least not for the same reasons -- pursuing and spending long hours with the kinds of people I'll likely only meet in passing, all in an effort to better understand the world and himself and to 'find his God.'"—Pittsburgh Post Gazette

"Well-researched, informative and engaging, MAN SEEKS GOD is packed with facts and wisdom that, regardless of which God you root for, will leave what a Buddhist friend of Weiner's calls 'Post-it Notes on the brain.'"
—Washington Post

"It is not so much the various religions and religious practices examined that make MAN SEEKS GOD compelling, but the people Weiner encounters and spends time with as he travels around the world in search of something to fill the proverbial 'God shaped hole.'...[an] honest and neurotic, generally entertaining book."—Bookreporter.com

"Writing about spirituality is fraught with ironies: Isn't the divine supposed to be beyond words? How to describe the inner landscape without sounding insane or precious? Eric Weiner's quirky religion-hopping travelogue, MAN SEEKS GOD actually embraces these pitfalls, while poking good-natured fun at the genre.... a refreshing departure from more weighty spiritual tomes."
—San Francisco Chronicle

"In a time when many religious people insist only their own faith is valid, Weiner traveled the world in a quest for answers to spiritual questions.... Not taking himself (or others) too seriously, Weiner's travels take him to Turkey, where he whirls, dervish-style; and Las Vegas, where he encounters Raelians, who base their beliefs on UFOs. He studies Kabbalah (without Madonna) and meditates with Tibetan lamas."—New York Post