Spirit Bear: Encounters with the White Bear of the Western Rainforest (Paperback) 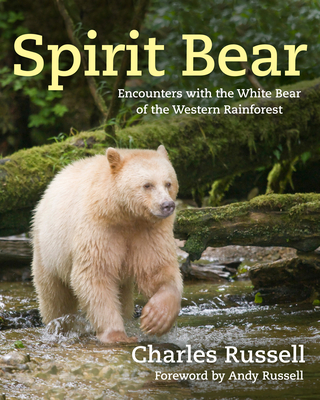 Written with vivid detail and passion, Spirit Bear is the story of acclaimed naturalist Charles Russell's journey to study and learn from the extraordinary spirit bears on the remote Princess Royal Island.

From early experiences observing black bears in the Rocky Mountains with his father, the well-known writer and broadcaster Andy Russell, to nerve-racking encounters with grizzlies in British Columbia's Khutzeymateen Valley, Charles Russell has spent a lifetime studying bears in their natural habitat. In 1991, Russell visited Princess Royal Island, an uninhabited island off the coast of British Columbia. There, amidst the rivers and trees of the western rainforest, he encountered the elusive spirit bear.

Known to scientists as the Kermode bear and to the public as the white, ghost, or spirit bear, these extraordinary animals have never been exposed to civilization. In Spirit Bear, Russell recounts his experiences on Princess Royal Island -- trekking over rocks and through streams; waiting hours for the evasive ghost bear to appear; and finally coming face-to-face with a spirit bear only inches from his nose. Illustrated with over 100 stunning colour photographs, Spirit Bear provides beautiful and astonishing insight into the habits and nature of the Kermode bear, and is part of an ongoing effort by conservationists to save Princess Royal Island as a sanctuary for these remarkable animals.

The reissue of Spirit Bear, a classic work of Canadian nature and wildlife, includes an updated design and a new Afterword by the author.