The Forest Unseen: A Year's Watch in Nature (MP3 CD) 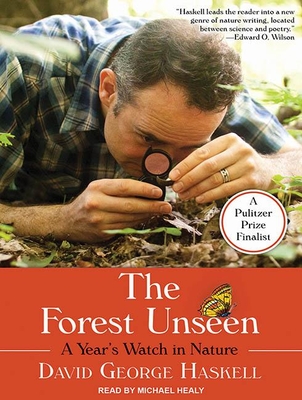 In this wholly original book, biologist David Haskell uses a one-square-meter patch of old-growth Tennessee forest as a window into the entire natural world. Visiting it almost daily for one year to trace nature's path through the seasons, he brings the forest and its inhabitants to vivid life. Each of this book's short chapters begins with a simple observation: a salamander scuttling across the leaf litter; the first blossom of spring wildflowers. From these, Haskell spins a brilliant web of biology and ecology, explaining the science that binds together the tiniest microbes and the largest mammals and describing the ecosystems that have cycled for thousands-sometimes millions-of years. Each visit to the forest presents a nature story in miniature as Haskell elegantly teases out the intricate relationships that order the creatures and plants that call it home. Written with remarkable grace and empathy, The Forest Unseen is a grand tour of nature in all its profundity. Haskell is a perfect guide into the world that exists beneath our feet and beyond our backyards.

David George Haskell is a professor of biology at the University of the South and was named the Carnegie-CASE Professor of the Year in Tennessee in 2009. He lives in Sewanee, Tennessee.

Michael Healy has appeared Off-Broadway and on national TV, most notably on "Saturday Night Live" for three years, as well as in several national commercials. His audiobook recordings include "The Collector of Lost Things" by Jeremy Page and "The Valley of Fear" by Sir Arthur Conan Doyle.