A Bolt from the Blue: The Epic True Story of Danger, Daring, and Heroism at 13,000 Feet (Paperback) 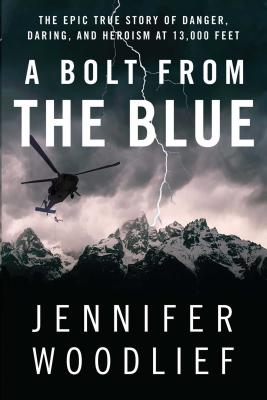 From the author of A Wall of White, the thrilling account of a spectacular mountain rescue after six climbers are struck by lightning.

On the afternoon of July 26, 2003, six vacationing mountain climbers ascended the peak of the Grand Teton in Jackson Hole, Wyoming. Rain and colliding air currents blew in, and soon a massive electrical charge began to build. As the group began to retreat from its location, a colossal lightning bolt struck and pounded through the body of every climber. One of the six died instantly, one lay critically injured next to her body, and four dangled perilously into the chasm below. In riveting, page-turning prose, veteran journalist Jennifer Woodlief tells the story of the climb, the arrival of the storm, and the unprecedented rescue by the Jenny Lake Rangers, one of the most experienced climbing search-and-rescue teams in the country.

Against the dramatic landscape of the Teton Range, Woodlief brings to life the grueling task of the rangers, a band of colorful characters who tackle one of the riskiest, most physically demanding jobs in the world. By turns terrifying and exhilarating, A Bolt from the Blue is both a testament to human courage and an astonishing journey into one of history’s most dangerous mountain rescues.

Jennifer Woodlief is a former reporter for Sports Illustrated. Her first book Ski to Die: The Bill Johnson Story (2005) was optioned by Warner Brothers with Matthew McConaughey to play Bill. A graduate of Stanford University and UCLA School of Law, her past jobs included prosecuting first-degree murder cases as a district attorney and working as a case officer with top secret clearance for the CIA.