The Book of Speculation: A Novel (Hardcover) 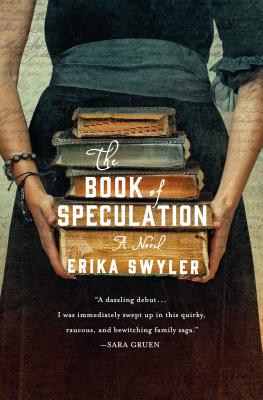 “While a book whose narrative hinges on drowning might not seem like a great beach read, Swyler's debut effort, redolent of salty ocean air, is just that...Its clever plot--fueled by a musty book and a powerful set of tarot cards--and Swyler's wonderful descriptions keep the pages swimming along.” —Entertainment Weekly

“A good book is magical. A piece of our heart stays tucked inside its lines when we return the book to its place on our shelf. Good novels about good books can be even more special, doubling the fun with two tomes to love. And when the book within the book is actually magical, as it is - or may be - in Erika Swyler's The Book of Speculation, well, let the wild read start.” —Star-Telegram

“A wonderful novel, full of mystery through the centuries [with] great details about carnival life, similar to The Night Circus by Erin Morgenstern.” —The Daily American

“In this dazzling novel, the immensely talented Erika Swyler sweeps seamlessly through generations and centuries, moving deftly back and forth and weaving the strands into an exquisite tapestry. I was immediately swept up in this quirky, raucous, and bewitching family saga. Swyler's prose is so polished and elegant it reads effortlessly, even as her distinct voice shines through--her rendering of the sea and its savage appetite rivals that of Annie Proulx's in THE SHIPPING NEWS. I absolutely loved this book, and consumed it whole. My only complaint is that I am already on the edge of my seat waiting for her next.” —Sara Gruen, author of WATER FOR ELEPHANTS and AT THE WATER'S EDGE

“THE BOOK OF SPECULATION is a luscious experience--dark, sweet, and wild.” —Katherine Dunn, author of GEEK LOVE

“Illustrations by the author add even more atmosphere to her prose.” —Booklist