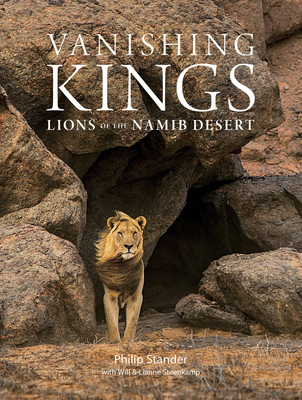 By Philip Stander (Photographer), Will And Lianne Steenkamp
$55.00
Email or call for price

Vanishing Kings, Lions of the Namib Desert is a unique record of an elusive predator in an unusual environment. It uncovers the secret lives of a small population of desert-adapted lions which occurs only in the oldest desert on our planet, the Namib. A first-ever, this extraordinary book about Desert lions celebrates the highly adaptive nature of one of our planet's most iconic predators which continues to battle for survival in today's world. The Namib is the only place on Earth where a small population of desert-adapted lions occurs. Remarkably, these unique lions have survived along the Namib's Skeleton Coast for decades, but until 20 years ago they were merely phantoms' elusive and seldom seen, and then believed to have become extinct. In 1997, scientist Dr Philip Stander discovered a small pride of survivors in the heart of the desert and began to study the lions: a study which turned into a lifelong commitment. Through the years he was able to unfold the secrets surrounding these highly adaptive big cats who appeared to thrive in their harsh environment. Having followed multiple generations of Desert lions from birth to adulthood, Stander takes the reader into their fascinating world, one that would otherwise have remained largely unknown. Through his intimate accounts of several male Desert lions' life stories, we come to understand how these rare lions survive in the relentless Namib Desert. Illustrated with over 300 astonishing images of Desert lions and other desert-adapted animals that survive in the Namib, this book is an account of one of the most remarkable research projects ever undertaken. "If you are interested in wild cats and lions in particular this is the book for you. The text is scholarly but highly readable by the average enthusiast. Basically it outlines the outstanding work done by Dr Philip Stander over many years in the Namib Desert in Namibia to conserve and document a very special and rare population of lions who made this hostile environment their home with some degree of success. Unfortunately, the unnecessary demise of 'The Five Musketeers' who were possibly the future for the long term survival of desert adapted lions is recorded which brings a very sad end to a fascinating journey. The photography in the book is wonderful, numerous lion images of the highest quality adorn just about every page. I particularly like the way the text follows a journey from the beginning of 'The Desert Lion Project' to the present day and apart from a very well written narrative includes detailed field notes, very well presented statistics and meaningful charts and maps. I regard this book as one of the best ever produced on the lion and it deserves a place in the library of every serious wild cat / wildlife enthusiast. The book also highlights the other desert adapted mammals that call this region home. It is in many respects a coffee table book, but contains a wealth of factual information, I feel it also represents excellent value for money and presumably also contributes to the long term aims of the project. The author remains in my opinion one of the most influential field zoologists to ever work with cats." J Weir.