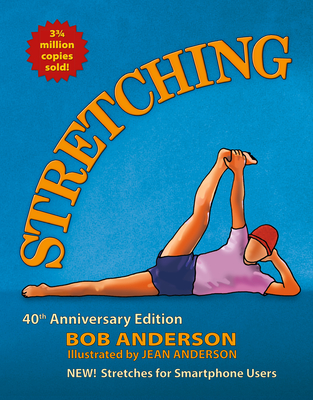 Stretching is the most popular fitness book in the world, having sold over 33/4 million copies in 40 years. It has been translated into 23 languages. In this new edition there are stretches for improving the bad posture attributable to cell phone usage ("tech neck"), and for people using computers.

This is the book that people tell their friends about, that trainers suggest for virtually every sport and activity, and that medical professionals recommend to people just starting to get back in shape. Stretching first appeared in 1980 as a new generation of Americans became committed to running, cycling, aerobic training, and workouts in the gym -- all of which are commonplace now.

It features stretching routines specific to a variety of people, including sports enthusiasts, travelers, children, gardeners, and people in wheelchairs. There is a new section titled "Stretches for the Digital World," with stretches for people using cell phones and/or computers, as well as tips for better posture and stretches to do in an office environment.

Bob Anderson is the world's most popular stretching authority. For over 35 years, Bob has taught millions of people his simple approach to stretching. Bob and his wife Jean first published a home-made version of Stretching in a garage in southern California in 1975. The drawings were done by Jean, based on photos she took of Bob doing the stretches. This book was modified and published by Shelter Publications in 1980 for general bookstore distribution and is now known by lay people as well as medical professionals as the most user-friendly book on the subject. To date it has sold over 3 million copies worldwide and has been translated into 23 languages.Bob is fit and healthy these days, but it wasn't always so. In 1968, he was overweight (190 pounds -- at 5'9") and out of shape. He began a personal fitness program that got him down to 135 pounds. Yet one day, while in a physical conditioning class in college, he found he couldn't reach much past his knees in a straight-legged sitting position. So Bob started stretching. He found he soon felt better and that stretching made his running and cycling easier.The American fitness boom was just starting, and the millions of people who started working out were discovering the importance of flexibility in their fitness programs. After several years of exercising and stretching with Jean and a small group of friends, Bob gradually developed a method of stretching that could be taught to anyone. Soon he was teaching his technique to others. He began with professional sports teams: the Denver Broncos, the California (now Anaheim) Angels, the Los Angeles Dodgers, the Los Angeles Lakers, and the New York Jets. He also worked with college teams at Nebraska, UC Berkeley, Washington State, and Southern Methodist University, as well as other amateur and Olympic athletes in a variety of sports. He traveled around the country for years, teaching stretching to people at sports medicine clinics, athletic clubs, and running camps.In the 1980s, Bob was a serious mountain runner and road biker. For ten years in a row he ran the Catalina Island Marathon in southern California, the 18-mile Imogene Pass run in Telluride, Colorado (which goes up over a 13,000-foot-high ridge), and the Pike's Peak Marathon. These days Bob spends most of his workout time on a mountain bike and hiking in the mountains above his house in Colorado, often going for 3-5 hour bike rides in the mountains, with occasional trips to Nevada. Though Bob works out a lot, he knows that training like this is not necessary for the average person to be fit. Through his travels, lectures, and workshops, he's kept in constant touch with people in all degrees of physical condition. Jean Anderson has a B.A. in art from California State University at Long Beach. She began running and cycling (and stretching) with Bob in 1970. She developed a system of shooting photos of Bob doing the stretches, then making clear ink drawings of each stretch position. Jean was photographer, illustrator, typesetter, and editor of the first homemade edition of Stretching. These days she oversees Stretching Inc.'s mail-order business, and hikes and cycles to stay in shape.