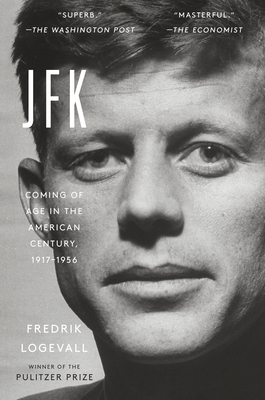 NEW YORK TIMES NOTABLE BOOK • A Pulitzer Prize–winning historian takes us as close as we have ever been to the real John F. Kennedy in this revelatory biography of the iconic, yet still elusive, thirty-fifth president.

“An utterly incandescent study of one of the most consequential figures of the twentieth century.”—Jill Lepore, author of These Truths: A History of the United States

By the time of his assassination in 1963, John F. Kennedy stood at the helm of the greatest power the world had ever seen, a booming American nation that he had steered through some of the most perilous diplomatic standoffs of the Cold War. Born in 1917 to a striving Irish American family that had become among Boston’s wealthiest, Kennedy knew political ambition from an early age, and his meteoric rise to become the youngest elected president cemented his status as one of the most mythologized figures in American history. And while hagiographic portrayals of his dazzling charisma, reports of his extramarital affairs, and disagreements over his political legacy have come and gone in the decades since his untimely death, these accounts all fail to capture the full person.

Beckoned by this gap in our historical knowledge, Fredrik Logevall has spent much of the last decade searching for the “real” JFK. The result of this prodigious effort is a sweeping two-volume biography that properly contextualizes Kennedy amidst the roiling American Century. This volume spans the first thirty-nine years of JFK’s life—from birth through his decision to run for president—to reveal his early relationships, his formative experiences during World War II, his ideas, his writings, his political aspirations. In examining these pre–White House years, Logevall shows us a more serious, independently minded Kennedy than we’ve previously known, whose distinct international sensibility would prepare him to enter national politics at a critical moment in modern U.S. history.

Along the way, Logevall tells the parallel story of America’s midcentury rise. As Kennedy comes of age, we see the charged debate between isolationists and interventionists in the years before Pearl Harbor; the tumult of the Second World War, through which the United States emerged as a global colossus; the outbreak and spread of the Cold War; the domestic politics of anti-Communism and the attendant scourge of McCarthyism; the growth of television’s influence on politics; and more.

JFK: Coming of Age in the American Century, 1917–1956 is a sweeping history of the United States in the middle decades of the twentieth century, as well as the clearest portrait we have of this enigmatic American icon.

Fredrik Logevall is Laurence D. Belfer Professor of International Affairs and professor of history at Harvard University. A specialist on U.S. foreign-relations history and modern international history, he is the author or editor of nine books, most recently Embers of War, which won the Pulitzer Prize for History and the Francis Parkman Prize.

“Masterful . . . based on years toiling in the archives but written with a delightfully light touch . . . At times it reads more like a novel than a biography, so vivid is the prose and so extraordinary the material.”—The Economist

“Logevall artfully melds the biographical and historical approaches. Though crafted as a kind of bildungsroman, JFK delivers something more than the traditional story of the callow wastrel’s maturation into the admirable adult.”—The New York Times Book Review

“A superb book . . . [The] remarkable rivalries within the Kennedy family—propelled by valour, vanity and greed—form the backbone of volume one of Fredrik Logevall’s riveting life of JFK.”—The Guardian

“This is the first of two volumes by a Pulitzer-winning Harvard professor of the highest gifts, and the most compelling biography I have read in years.”—The Sunday Times

“As Fredrik Logevall shows in his superb JFK: Coming of Age in the American Century, 1917–1956, Kennedy was a far deeper, worthier, more interesting character than the familiar revisionist cliche. . . . Logevall has a gifted historian’s grasp of the times as well as the life of JFK.”—The Washington Post

“This volume . . . plows much of the Kennedy ground with such dexterity and such wisdom. Misty-eyed Kennedy acolytes of a certain age will read it and weep. Modern, less romantic readers will read it and reap the benefit of Logevall’s acuity.”—The Boston Globe

“As Fredrik Logevall points out in his utterly absorbing biography, the first of a projected two volumes, Kennedy deserves our attention not simply because he was a celebrity, but because his celebrity is a key to unlocking modern American history itself. . . . JFK is biography at its very best.”—The Spectator

“It is the singular achievement of this magnificent new biography of John Fitzgerald Kennedy that it has taken one of the most scrutinized lives of the twentieth century and made it feel fresh. Harvard historian Fredrik Logevall scrapes away the encrusted layers of myth, rumour and cliché; the result is a generous portrait of the young Kennedy, one that is attentive to his contradictions and weaknesses even as it seeks to understand what it was that made him so extraordinary.”—The Telegraph

“With a novelist’s eye for the telling detail and vignette, [Logevall] strips away the layers of myth and sensationalism that obscure the real, live human being that was JFK . . . . One of the many pleasures of reading this keenly perceptive page-turner of a biography is that it also illuminates the story of America’s ascent to great power and then superpower status in [a] fresh and compelling way.”—The Daily Beast

“Such are Logevall’s eloquence and storytelling powers that, even though we all know the story’s tragic ending, he provides often overlooked detail about how it all started. He reveals the future president to be less skittish and far more savvy and independently minded than we have been led to believe. He also renders him less mythological and more accessible and familiar.”—Irish Examiner

“An excellent book . . . Logevall has taken a familiar story and retold it in a way that is captivating and persuasive, as the tale of triumphant emergence from war and the tragedy of an immigrant family.”—The Times (London)

“With impressive vision and flawless execution, Logevall bores down to a molecular level to put JFK’s life and achievements within the context of the history of the times, while simultaneously exposing the truths obscured by the most popular JFK misconceptions.”—Booklist (starred review)

“Our best historian of the Vietnam War now turns to another subject you thought you already knew, and he makes John F. Kennedy as alive and compelling as if you were reading about him for the first time. Fredrik Logevall portrays the young JFK with the masterful intimacy and sympathy that only a great scholar and writer could achieve.”—George Packer, author of The Unwinding: An Inner History of the New America and Our Man: Richard Holbrooke and the End of the American Century

“John F. Kennedy was a man before he was a monument, and among the great achievements of this wonderful book is how brilliantly Fredrik Logevall conveys both JFK’s humanity and the history of the age. With precision and with grace, Logevall has given us a memorable portrait of a man and of the world that, before he shaped it, shaped him. It’s a powerful, provocative, and above all compelling book.”—Jon Meacham, Pulitzer Prize–winning author of The Soul of America

“In this magisterial biography, Fredrik Logevall has deftly peeled away the many layers of myth surrounding John F. Kennedy to reveal a complex and surprisingly vulnerable human being. This first installment of his Kennedy biography is also the story of the rise of the United States to world power in a turbulent age. An essential read for anyone interested in the life and the times.”—Margaret MacMillan, author of War: How Conflict Shaped Us

“Fredrik Logevall’s brilliant biography rescues JFK from the myths that have long surrounded his early life without in any way obscuring the complexities of his character. There could be no more poignant reminder of what we were—far too soon—to lose.”—John Lewis Gaddis, Robert A. Lovett Professor of Military and Naval History at Yale University