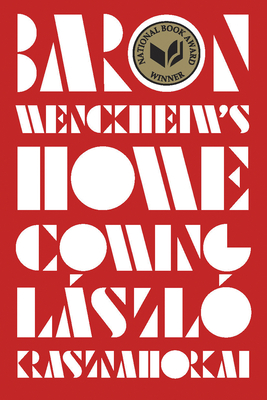 WINNER OF THE 2019 NATIONAL BOOK AWARD FOR TRANSLATED LITERATURE

"Krasznahorkai’s masterpiece" (The Millions); "Apocalyptic, visionary, and mad" (Publishers Weekly); "One of the supreme achievements of contemporary literature" (Paris Review); "Obsessive and visionary" (The New Yorker); "Genius" (The Baffler)

At last, the capstone to Krasznahorkai’s four-part masterwork

Set in contemporary times, Baron Wenckheim’s Homecoming tells the story of a Prince Myshkin–like figure, Baron Béla Wenckheim, who returns at the end of his life to his provincial Hungarian hometown. Having escaped from his many casino debts in Buenos Aires, where he was living in exile, he longs to be reunited with his high-school sweetheart Marika. Confusions abound, and what follows is an endless storm of gossip, con men, and local politicians, vividly evoking the small town’s alternately drab and absurd existence. All along, the Professor—a world-famous natural scientist who studies mosses and inhabits a bizarre Zen-like shack in a desolate area outside of town—offers long rants and disquisitions on his attempts to immunize himself from thought. Spectacular actions are staged as death and the abyss loom over the unsuspecting townfolk.

The winner of the 2019 National Book Award for Translated Literature and the 2015 Man Booker International Prize for lifetime achievement, László Krasznahorkai was born in Gyula, Hungary.

A master of peripatetic, never-ending sentences that brim over with vacillations, qualifications, and false epiphanies.
— Will Harrison - Hudson Review

A masterpiece, the culminating work of the extraordinary Hungarian writer’s career. The alternation of narrative darkness and radiant syntactical beauty makes this my personal favorite of the year.
— Michael Silverblatt - KCRW "Best of 2019"

The baron cuts a memorable figure, but the real star of Krasznahorkai's story is a philosopher who has cut himself off from society and lives in hermitage in a forest park, concerned with problems of being and nonbeing. In the end, the worlds the philosopher, the baron, and other characters inhabit are slated to disappear in a wall of flame.
— Kirkus

If you’re a fan of Krasznahorkai, you already know that you need to read this one: the final volume in his four-part series, in which the aging Baron Bela Wenckheim proceeds home to Hungary, to the highly absurd town of his birth.
— Emily Temple - LitHub

At the end of his life, Baron Wenckheim returns to a small town in Hungary, in search of his lost love. From this, László Krasznahorkai forges a fictional universe populated with rogues and visionaries, at once epic and intimate, apocalyptic and deeply comic. Ottilie Mulzet's remarkable translation captures the density of his extended sentences, their many twists and pivots, and the slow accumulation of their extraordinary intellectual and moral force. Singular and uncompromising, Baron Wenckheim's Homecoming is a masterpiece by one of the great writers of our time.

A vision of painstaking beauty.
— NPR

Krasznahorkai's fictions emit a recognizably entropic music. His novels—equal parts artful attenuation and digressive deluge—suggest a Beckettian impulse overwhelmed by obsessive proclivities. The epic length of a Krasznahorkai sentence slowly erodes its own reality, clause by scouring clause, until at last it releases the terrible darkness harbored at its core. Baron Wenkcheim’s Homecoming is a fitting capstone to Krasznahorkai’s tetralogy, one of the supreme achievements of contemporary literature.

“I’ve said a thousand times that I always wanted to write just one book. Now, with Baron, I can close this story. With this novel I can prove that I really wrote just one book in my life. This is the book—Satantango, Melancholy, War and War, and Baron. This is my one book.”

Krasznahorkai establishes his own rules and rides a wave of exhilarating energy in this sprawling, nonpareil novel, which harkens back to early works such as Satantango but with the benefit of the Man Booker International Prize winner’s mature powers. In a small Hungarian town, an eccentric and isolated genius known only as the Professor occupies a specially designed hut, ravaged by uncontrollable thoughts and trying to rid himself of “human imbecility” while keeping unsavory watch on his daughter. There will soon be more to watch: the ruined Baron Bela Wenckheim is returning home by train, in flight from his extensive gambling debts, only to fall in with a colorful collection of locals, all looking to take advantage of the Baron by one means or another. There’s the roughneck regulars of the local pub, the scheming town mayor looking to gin up excitement over the Baron’s return for his own visibility, and the con man Dante of Szolnok, whom the Baron encounters casually only to find he has his fingers in any pie from which he can extract a profit. The one bright spot in this Greek chorus of rogues is Marika, the Baron’s childhood sweetheart, whose romantic desires to reunite with the refined boy she remembers will be tested by corrosive new realities. This vortex of a novel compares neatly with Dostoevsky and shows Krasznahorkai at the absolute summit of his decades-long project. Apocalyptic, visionary, and mad, it flies off the page and stays lodged intractably wherever it lands.

Hungarian writer László Krasznahorkai is of that vanishingly rare breed of living writers whom it is astonishing to think of as contemporary. From his first novel, 1985’s Satantango, he has garnered comparisons not to the usual crop of popular novelists but to Beckett, Dostoyevsky, and Gogol. His books are echoic dirges that plumb the depths of human consciousness, taking place in downtrodden villages populated by madmen, charlatans, and recluses. Often the thoughts of a character will be rendered in a single sentence that can run on for pages, gathering definition and accruing implication like light passing through a crystal. Baron Wenckheim is another massive and masterly work set in the tragic, ridiculous pandemonium of a village far from Budapest, teetering on the brink of disaster—a novel that both breaks new ground and looks back to Krasznahorkai’s earliest work. It is also said to be his last.

"Krasznahorkai’s novels are less grim than grimoire – books of magic spells that, by their invocation, conjure worlds. It is a turn of great fortune to be alive and to have these novels that are filled to the brim with strange life."
— Ian Maxton - Spectrum Culture

A literary heir to Kafka, Beckett, and Dostoyevsky: Krasznahorkai’s genius has been his ability to absorb the tectonic changes of politics and culture into his singular style. His challenge of despair is applicable under any economic system. Baron Wenckheim’s Homecoming is his latest, longest, strangest, and possibly greatest novel—suffused with nihilism, but deeply funny. The absurd is more absurd, the incomprehensible more incomprehensible than ever. And yet, though it has its confrontations with despair and nihilism, Wenckheim is the funniest of Krasznahorkai’s novels.

László Krasznahorkai’s masterpiece—a manic Greek chorus that infuses festive Technicolor into his multifaceted, bleak vision. Baron Wenckheim's Homecoming calls into question our acceptance of the crippling status quo, delivering universal truths in a way that few books can anymore. It is precisely the novel we need in these difficult, foreboding times. His funniest and most profound book and, quite possibly, also his most accessible.

Krasznahorkai is a pungent delineator of character, and the landscape of his imaginary city is peopled with figures as busy and distinctive as those of a painting by Bruegel. While the novel energetically pursues Krasznahorkai’s habitual themes – disorder, spiritual drought, the impossibility of meaning in the absence of God – it does so in a tone that glitters with comic detail.
— Jane Shilling - The New Statesman

With an immense cast and wide-ranging erudition, this novel, the culmination of a Hungarian master's career, offers a sweeping view of a contemporary moment that seems deprived of meaning.
— The New Yorker

In Baron Wenckheim's Homecoming the Hungarian maestro Krasznahorkai is on peerless form. Twinkling with dark wit, his dizzyingly torrential sentences (heroically translated by Ottilie Mulzet) forever bait us with the promise of resolution. It's hard to think of anything comparable to the crazed abundance on show here; as a portrait of epistemological derangement –AKA fake news– it hits the mark as well as any more hidebound attempt to catch the zeitgeist.

WINNER OF THE 2019 NATIONAL BOOK AWARD FOR TRANSLATED LITERATURE


One of the most mysterious artists now at work.
— Colm Tóibín

His works tends to get passed around like rare currency. One of the most profoundly unsettling experiences I have had as a reader.
— James Wood

The Hungarian master of the apocalypse.
— Susan Sontag

The universality of Krasznahorkai’s vision rivals that of Gogol’s Dead Souls and far surpasses all the lesser concerns of contemporary writing.