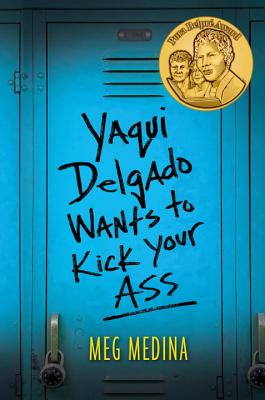 In Meg Medina’s compelling new novel, a Latina teen is targeted by a bully at her new school — and must discover resources she never knew she had.

One morning before school, some girl tells Piddy Sanchez that Yaqui Delgado hates her and wants to kick her ass. Piddy doesn’t even know who Yaqui is, never mind what she’s done to piss her off. Word is that Yaqui thinks Piddy is stuck-up, shakes her stuff when she walks, and isn’t Latin enough with her white skin, good grades, and no accent. And Yaqui isn’t kidding around, so Piddy better watch her back. At first Piddy is more concerned with trying to find out more about the father she’s never met and how to balance honors courses with her weekend job at the neighborhood hair salon. But as the harassment escalates, avoiding Yaqui and her gang starts to take over Piddy’s life. Is there any way for Piddy to survive without closing herself off or running away? In an all-too-realistic novel, Meg Medina portrays a sympathetic heroine who is forced to decide who she really is.

Meg Medina is the author of The Girl Who Could Silence the Wind and the picture book Tía Isa Wants a Car, illustrated by Claudio Muñoz, which won the Ezra Jack Keats New Writer Award. The daughter of Cuban immigrants, she grew up in Queens, New York, and now lives in Richmond, Virginia.

A nuanced, heart-wrenching and ultimately empowering story about bullying....Interweaving themes of identity, escapism and body image, Medina takes what could be a didactic morality tale and spins it into something beautiful: a story rich in depth and heart...Far more than just a problem novel, this book sheds light on a serious issue without ever losing sight of its craft.
—Kirkus Reviews (starred review)

Medina emphasizes Piddy’s acute sense of isolation without overplaying it, and she absolutely respects the totality of Piddy’s quandary...The message here is that tough and unfair stuff is really tough and unfair, but it’s also survivable; that’s a takeaway that readers will recognize as both true and valuable.
—Bulletin of the Center for Children's Books (starred review)

Yaqui may think she’s tough, but it’s Piddy and some of the other female characters, namely Piddy’s mother and her mother’s flamboyant best friend Lila, who make more lasting impressions. Medina’s setting stands out as well...Teens will identify with Piddy’s struggle.
—The Horn Book (starred review)

Medina authentically portrays the emotional rigors of bullying through Piddy’s growing sense of claustrophobic dread, and even with no shortage of loving, supportive adults on her side, there’s no easy solution. With issues of ethnic identity, class conflict, body image, and domestic violence, this could have been an overstuffed problem novel; instead, it transcends with heartfelt, truthful writing that treats the complicated roots of bullying withrespect.
—Booklist

The fast-moving plot explores family (especially mother–daughter) relationships, the importance of communication, and personal integrity. As Piddy witnesses and experiences abandonment, harassment, and brutalization, she realizes that her own reaction is most important. Her decision to make positive choices is a great example for teens. The story, fueled by the controversial title, holds cross-cultural appeal...
—VOYA

Piddy is a strong heroine whose sense of self is realistically jarred by her conflicting emotions. Medina effectively prods at the motivations behind bullying (without excusing it) and sensitively explores the delicate balance between belonging and maintaining individuality.
—Publishers Weekly (online-only)

There’s a lot packed into this vibrant small book which will make it a favorite for teens...Lots of action with a realistic setting, dialogue, relationships, problems, and solutions make this book a winner. The cover—a blue locker with graffiti for the title—will attract reluctant readers. The content will keep them reading to the end and wanting more, especially to hear Yaqui’s story.
—SLJTeen

Books about bullying are on the rise as adults grapple with its causes and impact — and young people struggle to deal with it. This gritty novel manages to transcend the usual earnest fictional treatment by delivering a protagonist who is more than a mere victim and an ending that rings complicatedly true. ... This unflinching novel, with its richly developed main character, deserves a place with two other nuanced bully books for teens: Rita Williams-Garcia’s JUMPED, a 2009 National Book Award finalist that explores the mindsets of bully, victim and bystander; and Adam Rex’s FAT VAMPIRE, in which a main character confronts her guilt as a cyberbully
—The Washington Post

Amid an explosion of bully books, Meg Medina's novel stands out for its honesty about girl-on-girl violence and its intelligent, insightful narrator. ... Medina brilliantly captures the sense of foreboding that envelops bully victims.
—Shelf Awareness

YAQUI DELGADO WANTS TO KICK YOUR ASS should be taught in schools, read by counselors and parents, and used as a tool to discuss the importance of finding your voice, telling the truth and asking for help.
—Common Sense Media