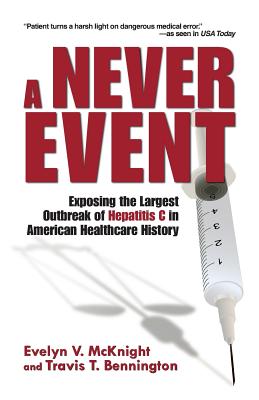 Usually Ships in 1-5 Days
(This book cannot be returned.)

CANCER CLINIC CAUSES WORST HEPATITIS OUTBREAK IN US HISTORY In the small farming community of Fremont, Nebraska, townspeople eagerly welcomed an acclaimed doctor as the first full-time oncologist at their new cancer treatment center-but the fanfare soon turned into a nightmare.
During chemotherapy treatments, 857 patients who were already waging the fights of their lives against cancer, were inexplicably exposed to the deadly, blood-borne hepatitis C virus. At least ninety-nine of them contracted the lethal illness. The horror was unprecedented-this was the largest healthcare-transmitted outbreak of hepatitis C in American history.
A Never Event-a term used to describe a preventable medical tragedy-is a searing story of recklessness, deception and betrayal. It's part mystery, part courtroom drama.
Written by a survivor of the tragedy and an attorney who represented many of the victims, A Never Event is a wake-up call to medical and legal communities nationwide.
" A] harrowing account... I commend McKnight's] advocacy and efforts to raise awareness about healthcare-related infections and other potentially life-threatening illnesses."-Hon. Shelley Berkley, congresswoman, Nevada
"The wake-up call to doctors, nurses and to patients."-Joe Hardy, MD, Nevada State Assembly
"A 'must-read' for patients." -Charles Stokes, president and CEO, CDC Foundation
" McKnight's] story has provided hope to people across the nation."-Lawrence Sands, DO, MPH

Evelyn V. McKnight contracted the chronic hepatitis C virus during the Nebraska outbreak. She co-founded the patient advocacy organization HONOReform, which has been recognized by CBS, CNN's American Morning, USA Today, The Associated Press and Newsday. Travis T. Bennington is a practicing civil trial attorney who successfully represented nineteen victims of the Nebraska hepatitis C tragedy. Mr. Bennington is also a co-founder of HONOReform. A portion of the profits from this book will go to the HONOReform Foundation. www.HONOReform.org