The Golden Spruce: A True Story of Myth, Madness, and Greed (Hardcover) 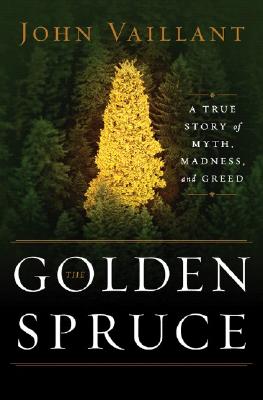 A tale of obsession so fierce that a man kills the thing he loves most: the only giant golden spruce on earth.

As vividly as Jon Krakauer put readers on Everest, John Vaillant takes us into the heart of North America's last great forest, where trees grow to eighteen feet in diameter, sunlight never touches the ground, and the chainsaws are always at work.

When a shattered kayak and camping gear are found on an uninhabited island, they reignite a mystery surrounding a shocking act of protest. Five months earlier, logger-turned-activist Grant Hadwin had plunged naked into a river in British Columbia's Queen Charlotte Islands, towing a chainsaw. When his night's work was done, a unique Sitka spruce, 165 feet tall and covered with luminous golden needles, teetered on its stump. Two days later it fell.

The tree, a fascinating puzzle to scientists, was sacred to the Haida, a fierce seafaring tribe based in the Queen Charlottes. Vaillant recounts the bloody history of the Haida and the early fur trade, and provides harrowing details of the logging industry, whose omnivorous violence would claim both Hadwin and the golden spruce.

John Vaillant has written for The New Yorker, the Atlantic, Outside, National Geographic Adventure, and Men’s Journal, among others. He lives in Vancouver, British Columbia. The Golden Spruce is his first book.