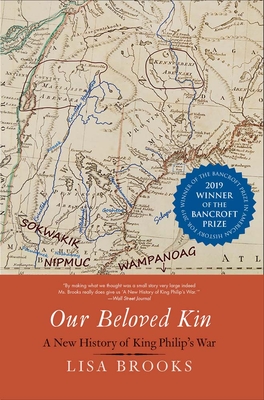 Winner of the 2019 Bancroft Prize: A compelling and original recovery of Native American resistance and adaptation to colonial America

“By making what we thought was a small story very large indeed—Ms. Brooks really does give us ‘A New History of King Philip’s War.’”—The Wall Street Journal

“Provides a wealth of information for both scholars and lay readers interested in Native American history.”—Publishers Weekly

With rigorous original scholarship and creative narration, Lisa Brooks recovers a complex picture of war, captivity, and Native resistance during the “First Indian War” (later named King Philip’s War) by relaying the stories of Weetamoo, a female Wampanoag leader, and James Printer, a Nipmuc scholar, whose stories converge in the captivity of Mary Rowlandson. Through both a narrow focus on Weetamoo, Printer, and their network of relations, and a far broader scope that includes vast Indigenous geographies, Brooks leads us to a new understanding of the history of colonial New England and of American origins. Brooks’s pathbreaking scholarship is grounded not just in extensive archival research but also in the land and communities of Native New England, reading the actions of actors during the seventeenth century alongside an analysis of the landscape and interpretations informed by tribal history.

Lisa Brooks is professor of English and American studies at Amherst College. She is the author of The Common Pot: The Recovery of Native Space in the Northeast.

“By making what we thought was a small story very large indeed—Ms. Brooks really does give us ‘A New History of King Philip’s War.’”—The Wall Street Journal

“Brooks’s project provides a wealth of information for both scholars and lay readers interested in Native American history.”—Publishers Weekly

“This well-written and engrossing title is an essential read for anyone interested in U.S. history.”—Library Journal, starred review

“The disappearance of indigenous voices and interlocutors during the war produced a problem for historians. . . . In Our Beloved Kin: A New History of King Philip’s War, Lisa Brooks sets out to change this. She effectively reverses a one-sided view of what has long been considered the most devastating war in American history. . . . In so doing, she gives a new account of an event even as she generates a new way of narrating history.” —Sarah Rivett, American Literary History

"Abenaki scholar Lisa Brooks's Our Beloved Kin: A New History of King Phillip's War is a transformative re-visioning of a crucial moment in US and Indigenous history."—Kirby Brown, Legacy


“An innovative work. . . .Our Beloved Kin aims at nothing less than a paradigm shift in the study of colonial New England, which it largely achieves by illustrating the value of treating King Philip’s War as one incident in the longer history of settler colonialism. . . . [This book] sets out to continue and deepen a tradition of revisionist historiography that began in the 1980s. . . . A major contribution to the field of colonial American history after the ‘linguistic turn.’. . .  [It] powerfully illustrates the transformative effect that foregrounding Indigenous perspectives on the past and present can have for the ongoing construction of the American story.”—David J. Carlson, Early American Literature

Winner of one of the 2019 Bancroft Prizes in American History and Diplomacy, sponsored by Columbia University

Listed as one of the “must read “ titles in the 19th annual non-fiction category for the Mass Center for the Book Awards.

"Our Beloved Kin is a major intellectual feat. With brilliant narration and storytelling, Brooks engages in a critical remapping that centers Indigenous sovereignty and kinship with conceptual rigor, methodological innovation, and important historical interventions"—J. Kēhaulani Kauanui, author of Hawaiian Blood: Colonialism and the Politics of Sovereignty and Indigeneity

"In this mesmerizing and methodologically bold reassessment of King Philip’s War, Lisa Brooks brings to life the gendered resistance to colonialism in Indigenous place-worlds through the language and landscape of kinship."—Jean M. O'Brien, author of Firsting and Lasting: Writing Indians Out of Existence in New England

"There have been many books about King Philip’s War but none like this. Our Beloved Kin is insightful and a better way to understand New England’s past."—Colin G. Calloway, author of The Indian World of George Washington

“Lisa Brooks brilliantly guides us through the “place-worlds” of Weetamoo and James Printer to create a stunningly original account of King Philip’s War. The Native viewpoint changes everything we thought we knew.”—Mary Beth Norton, author of In the Devil’s Snare: The Salem Witchcraft Crisis of 1692