Where the Salmon Run: The Life and Legacy of Bill Frank Jr. (Hardcover) 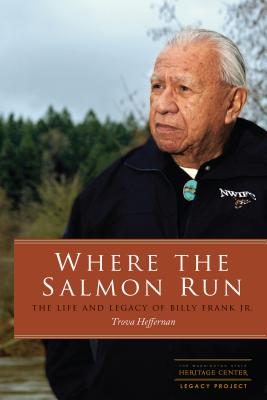 Billy Frank Jr. was an early participant in the fight for tribal fishing rights during the 1960s. Roughed up, belittled, and handcuffed on the riverbank, he emerged as one of the most influential Northwest Indians in modern history. His efforts helped bring about the 1974 ruling by Federal Judge George H. Boldt affirming Northwest tribal fishing rights and allocating half the harvestable catch to them. Today, he continues to support Indian country and people by working to protect salmon and restore the environment.

Where the Salmon Run tells the life story of Billy Frank Jr., from his father's influential tales, through the difficult and contentious days of the Fish Wars, to today. Based on extensive interviews with Billy, his family, close advisors, as well as political allies and former foes, and the holdings of Washington State's cultural institutions, we learn about the man behind the legend, and the people who helped him along the way.