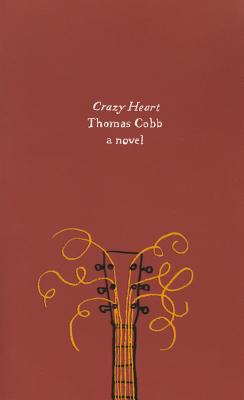 “The milieu is as resonant as a steel guitar, and the plot moves along without skipping a beat.” —New York Times Book Review

At the age of fifty-seven, Bad Blake is on his last legs. His weight, his ticker, his liver, even his pick-up truck are all giving him trouble. A renowned songwriter and “picker” who hasn’t recorded in five years, Bad now travels the countryside on gigs that take him mostly to motels and bowling alleys. Enter Ms. Right. Can Bad stop living the life of a country-western song and tie a rope around his crazy heart?

Thomas Cobb is the author of Crazy Heart, which was adapted into a 2009 Academy Award-winning film starring Jeff Bridges, and Shavetail, among other books. He grew up in southern Arizona and now lives in Rhode Island with his wife.

“A measure of Thomas Cobb’s talent is that he can make Bad Blake’s story amusing even as we watch him fall. Bad is entirely sympathetic, and this crazy heart is vivid; the milieu is as resonant as a steel guitar, and the plot moves along without skipping a beat.” — New York Times Book Review

“[Cobb’s] picture of the scraggly underside of Western music is brutally convincing.” — The New Yorker

“Blake’s dedication to, and integrity towards, his country music is more than matched by Cobb’s moving, respectful evocation of the world of country music, and the life and times of Bad Blake.” — Boston Herald

“In producing as nearly a masterpiece as the subject has yet attracted, Cobb seems to have triumphed….Cobb has created an unforgettable character who engages not only your interest but your emotion…and who proceeds to take you on a roller-coaster ride through his tawdrily tumultuous life.” — Chicago Tribune

“Crazy Heart is a beautiful book….The characters are cut cleanly out of America—the roadside West, the dance halls and beer joints, the occasional big concert, Houston, Nashville, Southern California, and the endless, eternal hotel rooms that are as close to home as a country singer ever gets….Bad Blake is a man you will not soon forget.” — Washington Times

“Thomas Cobb has produced a piercing, keenly observed chronicle of modern Americana, getting across the current mores and attitudes as experienced by C&W musician Blake.” — Los Angeles Times

“Thomas Cobb has written a bitter, witty psychological profile of an aging genius that is also a wonderful celebration of country music. Bad Blake lives at the poor end of the rainbow, but you’ll never forget him. Crazy Heart is a splendid achievement.” — Donald Barthelme

“Crazy Heart is a beautiful book….The characters are cut cleanly out of America….Bad Blake is a man you will not soon forget.” — Washington Times

“This is a heartfelt book: the descriptions of writing songs and playing them, of finding love and ruining it, of sweet, painful memories. There’s nothing startling in the plot or the characters, but they are alive.” — Houston Chronicle

“You can almost hear the whining twang of a pedal steel guitar and the droning of a mournful singer while reading Crazy Heart.” — Fort Worth Star-Telegram